A Medieval Tower seaside of Sounio 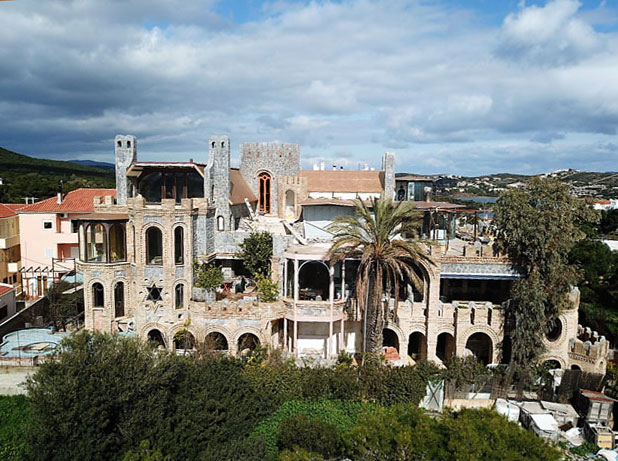 A unique milestone project.
Area 3500sqm Consumption from the network ZERO. Fuel consumption ZERO
A challenging project from every angle.
The main problem that had to be solved was the difficulty of passing cables due to the stone cladding and inside the building
KNX-RF wireless solutions were used in combination with intelligently addressable luminaires.
The building is energy efficient and is heated by the combination of a large solar collector installation and a small heat pump in combination with geothermal energy.
GDS manages the flow of energy between geothermal and solar panels, reverently maintaining the balance of energy storage and recovery from the ground between summer and winter. Of course, the nearby sea and the increased thermal conductivity of the soil help positively.
Inside the building heating and cooling are provided by underfloor heating / cooling and fancoils.
Liquefaction on the floors is avoided by the method of GDS and the special controller he has developed
Priority and mode of operation are automatically selected by the system with the ability to be bypassed by users in special cases
The 50KW photovoltaic installation is more than enough for the operation of the building since all the luminaires are LED while the other consumptions have been kept low.
The lighting in corridors and common areas is controlled by presence detectors while in each area there is at most one KNX switch for the absolutely necessary
TENSE jewelry in stone version was chosen for switches that perfectly match the space.
Detailed operations are performed by tablets and mobile phones. Every action of the users causes the display of the consumed energy in the mobile devices
GDS made the study of the entire electrical installation, the KENAK study of losses and thermal insulation and the calculations of the basic loads so that the building is zero energy and guided the construction and the selection of lighting and electrical appliances.

We also installed
Wired and wireless Data Network with Bandwidth management for the management of the Internet and internal Multimedia sources
Purely audiovisual systems based on Ip
Alarm connected to the KNX system for display, operation, cooperation with the energy saving system and
Fire detection
CCTV system
Ground and satellite signal reception and distribution system. Everything is digitized and transmitted over the data network to televisions and mobile devices via streaming.
Access control system with face recognition and mobile phone display with NFC
Ip CCTV which is also accessible from the Internet
A small 20KVA generator with automatic switching in case of a serious problem. The generator is fully integrated in the automation system which during its operation is programmed to do dynamic load management up to its maximum capacity.
The Installation supports charging of two electric cars. Part of dynamic power management.
Because the photovoltaic system is interconnected from the public supply network, the automation system continuously measures the excess energy stored in the network and uses it at the right time for the benefit of the installation.