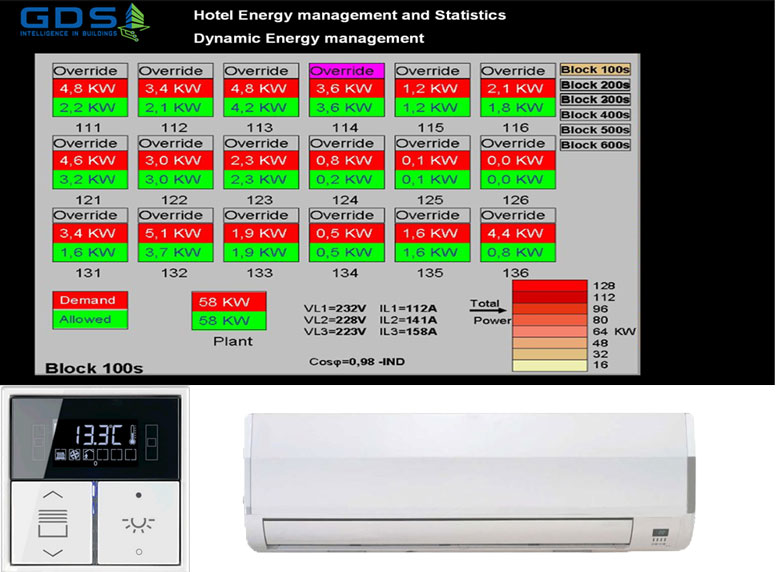 This is a unique application that operates an installation with the minimum possible electrical power.
Continuously monitors the power requirement of all controlled systems and has the appropriate power at the various loads
Air conditioning is the main power consumption and so the A / C system is the main goal of the system. To achieve the goal, we influence the slope of the efficiency curve of air conditioners in an extremely complex way driven by mathematical models.
An intelligent algorithm changes the target temperature to the air conditioner in such a way as to force its inverter to operate within the power limits calculated for the given time.

This method was originally developed to support the operation of a hotel at half power due to the inability of the electricity company to provide all the power required for its operation at the site. A side achievement is the reduced energy consumption that while initially it is not the goal, the method has a positive effect on it as well, at a rate that even reaches 40% when combined with the intelligent recognition of presence in the rooms.
The method is based on powerful mathematical and computational models developed by GDS and running on the hotel’s central server.

The rooms are constantly ordered by our algorithm in descending order of the difference Desired temperature – prevailing.

The reduction of the power results in the achievement of the desired result (target temperature) in more time but also the satisfaction of the overall consumption target of the hotel.

Of course, for special cases of customers, there is the possibility for the operators to bypass the automatically calculated priority of the room and to give them priority in consumption.